Home » News » Free to be yourself – minus the labels

Free to be yourself – minus the labels 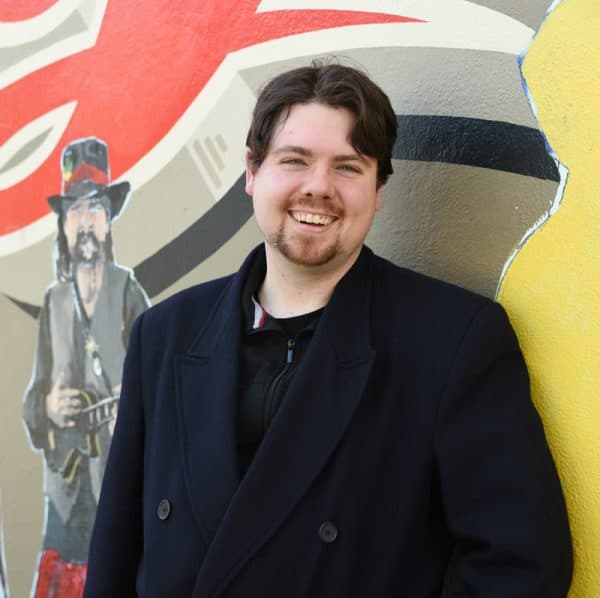 These are all labels Andrew Chambers has been given over the years.

But they are not words you will hear when he visits our Mental Health Services in Goodwood each week.

You are more likely to hear the terms Mental Elf, Anxie-tyrannosaurus, Schizo-Phoenix or Bipolar Bear.

These are characters Andrew has created as part of his artistic expression around mental health, which often crop up in his drawings or digital storytelling.

Some of his creations have featured in our Conexoz magazine, while another was turned into a banner for last year’s Festival of Now, during Mental Health Week.

“When I first started coming here I was very withdrawn from the world.”

Andrew was 20 when his psychiatrist referred him to our GP Access program, where he was teamed up with community support worker Bill.

“Having Bill come around each week was really helpful to me,” Andrew, now 26, says.

“He helped me catch buses, he helped me connect with other things in the world and then he brought me to the art group here.

“I felt drawn to it. I thought, ‘These people are pretty cool. Maybe I can hang with them?’”

After spending some time in art group, Andrew became involved in Squid Group – a monthly session where peer workers, volunteers and clients come together to talk about life, share experiences and have a laugh.

Their roles are not acknowledged in the group, they come together as individuals who have each been touched by mental health in their own way.

The group’s success saw members invited to the Social Work Futures conference at the University of South Australia in June, where Andrew was among the presenters.

“I had butterflies and all sorts of things going on but when it was my turn to talk, I got the message across and I think it went really well.”

Andrew is no longer a client of GP Access but he remains a firm part of the furniture at Goodwood.

“When it came time for me to exit the service, I still wanted to be around so I signed on as a volunteer and it is one of the best decisions I’ve ever made,” he says.

Every Tuesday Andrew volunteers his time to lead a two-hour gaming group, where young people experiencing mental health issues use video games as a way to connect and have fun, without any pressure.

“A lot of the people who come might not often bond with other people,” Andrew says.

“Here, they can play a game, enjoy their time and also bond with other human beings.”

Andrew doesn’t know what his life would look like today if he hadn’t been referred to GP Access.

“In the dark times, I just wouldn’t talk to any strangers. Even my own teachers at high school I would be afraid to speak to,” he says.

“Now I’m very comfortable catching public transport, I finally got my Ps, my imagination has increased in potential.

“Whatever my future may be, I know that I will always try to maintain my connection here.”

As our interview draws to a close, one of the peer workers Andrew has known for almost seven years chimes in that until now, she never even knew his diagnoses.

It’s just not that important.

What is important to the team at Goodwood is that everyone who walks in the door feels supported, welcomed and free to be themselves – minus the labels.