A chat with Hakim Oerton 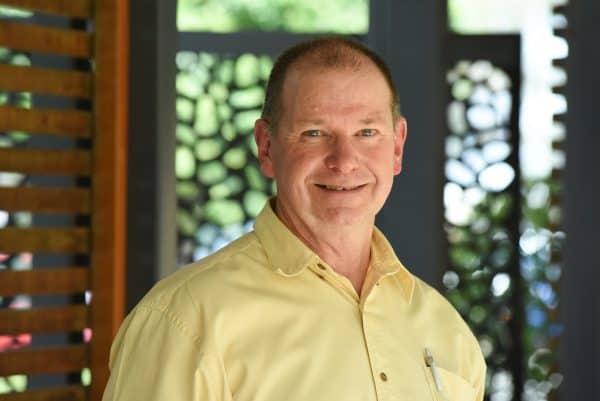 As a Pastoral Practitioner at Regency Green Multicultural Aged Care, Hakim Oerton plays a crucial role supporting residents and staff. We sat down to talk about some of the pivotal personal, professional and spiritual experiences in his life that have brought him here.

Q: How do you explain your role as a Pastoral Practitioner in aged care?

A: Basically, my work is to help people find connection, meaning and purpose. To help them with questions such as ‘What’s my life been about?’ and ‘What’s ahead of me?’ or ‘How can I make sense of my experience here and now?’ It is also a ‘travelling with’, seeing the other in their wholeness, being a witness as people journey through a significant period in their life.

Q: What are some of the ways you do this?

A: When somebody comes to live at Regency Green one aim is to find out as much information as possible about where they find peace, where they find connection, what matters to them. I try to build a repertoire of knowledge about the individual so I know how I can be useful to them when they are less functional. I find out what they did in their life so that I can sit beside them and remind them when they can hear but can’t speak. Another way I connect with people here is through music. I find out what sort of music they grew up with because that is what will move them.

Q: Can you give a recent example of your work supporting a resident?

A: One of the residents I had known for a year and a half died a couple of months ago. She was a strong woman who had escaped from Pol Pot and brought her children and relatives with her to Australia. She was a great communicator in both English and Burmese but when her time came to an end, she had dementia. The first thing she lost was balance and then language. We had conversations as she was losing her English but we knew each other well enough that I could fill in the gaps. I was with her a few days before she died and she was in palliative care and I asked myself, ‘How can I connect with this woman?’ When I first met her she had photos of Buddha and photos of Jesus but towards the end of her life, it was just Buddha. I started playing her some music from Burma and some Buddhist chants and she was not really focused but when I started singing along to one of them, she stopped and gave eye contact. She stayed that way – so focused. I kept singing and singing and even when the music was off, I kept chanting. She hadn’t slept for about  24 hours but she was actually nodding off. The next day I came back and she was much brighter and was actually drinking water by herself. She had her daughter and sister with her. They didn’t know how to talk to her and were sitting in silence. I reminded them, ‘She can’t speak but she can hear.’ I encouraged them to tell stories about what she was like as a sister and as a mother. They started talking about who this woman was to them, while she listened and smiled. That’s when I knew my job was done. She died a few days later.

Q: As well as individual support for residents, what other services do you provide?

A: I support staff in the same way I support residents – by seeing individuals who comes to work as whole people with a unique life story and the same needs for meaning, purpose and connection. I also conduct a worship service here most Wednesdays for the Christian residents. For weeks I’ve been focusing on connection to each other and this morning for the first time people greeted each other as they walked in. We had a woman from Africa who speaks Amharic and a Chinese woman who only speaks Mandarin and they were talking to each other. Neither understood a word but there was this beautiful connection.

Q: You mentioned you deliver a worship service but you aren’t Christian yourself. Can you tell me about your religious background?

A: I am Aussie born and grew up in a nominally Presbyterian family. My parents used to give us two threepences – one for the plate and one for the bus – and send us off to Sunday School while they stayed home. I explored Christian youth groups when I was an early teen but didn’t really find anything there. That’s when I decided I was an atheist. I loved the intellectual arguments and that sort of stuff. I then came to the horrible realisation that believing there is no God is the same as believing there is a God, in that it is an assertion that has no basis in provable fact. So then I became an agnostic.

Q: From an agnostic 40 years ago through to a Pastoral Practitioner today, when did the change occur?

A: Hospital trained as a psychiatric nurse, I have worked in many places including prisons, methadone units, drug and alcohol centres. Religious delusions were fairly common: ‘I am Jesus, I am God, the Lord speaks through me’ and so on. I had read me enough of the Bible to know what mI was hearing coming out of the mouths of psychotic individuals was not so different to what came out of the mouths of prophets, who we revere today. So I’ve restrained Jesus, held him down and injected him with antipsychotics. I developed a curiosity around what was happening. It took me to an area of exploring alternatives to traditional psychiatry because I could see the medical model wasn’t working. I started reading; Reich, Jung, Fromm, Erickson, Carl Rogers – and because I was reading rather widely I came across some Sufi teaching stories. I had this incredible sense of yearning. I felt like we had really lost something and within a couple of weeks I met somebody who was seeing a Sufi teacher. That’s been my path for about 35 years now.

Q: Can you tell me more about what it means to be a Sufi?

A: To be a Sufi is to have a pure heart and union with God. Most of us would fall far short of that ideal and refer to being on a Sufi path. We seekers strive to see the face of God wherever we look, to live with awareness of the presence of God, and to live with love and kindness. There is also that sense of peace and joy that comes as a result of prayer, silence and contemplation.

Q: Is it difficult as a Sufi to lead Christian services?

A: No. The core of my training and experience is that we come from the same source and are bound for the same goal. Prophets or mystics have existed in most cultures and traditions and give similar teachings, coloured by their context. And central to these are faith in something bigger than oneself and how to live a good life in community. The teachings of Jesus have many of these qualities. My work is to support people in their faith, whatever name for God or the source of life they use.

Q: A personal tragedy 20 years ago transformed your life. Can you tell me about that?

A: I was living in the Blue Mountains with my then wife and four children and our house burnt down. I was driving home from work when the phone rang and I was told, ‘Your house is on fire and one of your daughters is missing. Get home as soon as you can.’ My daughters, aged 2 and 4, died. It took me two years to fall apart completely because I tried to continue as though things were the same. They weren’t. I developed quite a severe depressive illness and I was out of work for at least a decade. I learnt a lot about being dysfunctional and what that feels like

Q: What was the turning point to come out of that depression?

A: It’s interesting because after a while you get sick of not working and ask, ‘What next? How can I find meaning and purpose and be useful?’ That’s when I started a lot of voluntary work. I volunteered at the SA Writers’ Centre and at a hospital. I got involved with an organisation that was just forming at that time, called Mindshare, and started supporting people with a mental illness who were trying to write. I started a men’s group in Mount Barker. And then I heard from my sister-in-law that she was involved in this thing called Clinical Pastoral Education. That’s basically been my journey since. I undertook training and then met UnitingSA Minister Les Underwood and that’s what has led me to be a Pastoral Practitioner here, now.

Q: This role seems to bring together all your experiences – personal, professional and spiritual. Is that how you see it?

A: When I look back, I was always more pastoral than my psychiatric nurse peers. As Pastoral Practitioner at Regency Green, I am part of a team that shares the joys and sorrows of uniquely lived experiences in a diverse population of residents and staff. This is reflected by the flags outside, the diversity of language, the possibility and reality of communication beyond language. I feel like I have been given a huge opportunity. I have ended up in a place where my life experiences together with the role allow me to be myself more. I feel like I’m fulfilling my purpose.

Q: If you had one bit of advice for people, what would it be?

A: Explore the science of mindfulness. Learn how your thoughts and feelings influence your health and functioning in the world. Learn how to take charge of the vehicles your soul or consciousness calls home for now.

Read the ninth issue of Flourish in full.