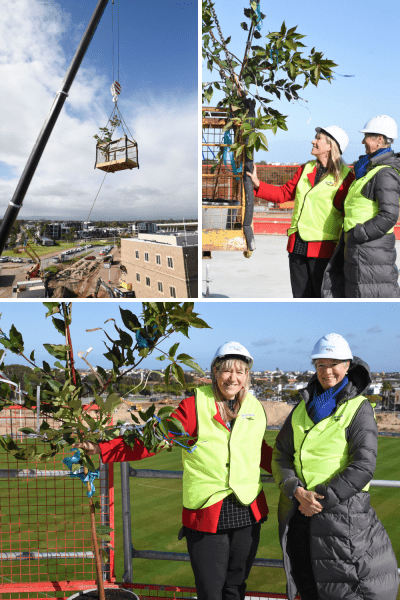 UnitingSA’s aged care complex under construction in the heart of Adelaide’s west today celebrated reaching its highest structural point with a topping out ceremony.

In keeping with time-honoured tradition, the topping out ceremony included the craning of a tree onto the top floor of the five-storey building.

UnitingSA Board Chair Gael Fraser says it is a significant milestone in the development, which is on track to be complete by the end of the year and welcome its first residents in early 2021.

“We are thrilled we have been able to move safely forward with this project amid COVID-19 and that we are on track to have building works complete by Christmas,” Ms Fraser says.

“This complex will provide a home to cater for people’s needs through every stage of the ageing journey – from retirement living to residential aged care and, where needed, memory support for those living with dementia.

“UnitingSA West Lakes has been a long-held vision of ours and we are excited to be part of a growing community which has older people at its heart.”

UnitingSA West Lakes is creating work for about 900 people during construction and once operational, will employ an estimated 150 people ongoing.

Key features of the complex include:

UnitingSA CEO Libby Craft says by bringing the different types of accommodation into one complex, the development will help address the varied aspects of ageing.

“For couples whose health and physical needs change at different rates, this development will provide the option of one person living independently in a retirement apartment while the other has their higher needs met in residential aged care,” she says.

“We know being able to live under one roof will bring peace of mind to many during this later stage of life.

“Across the aged care sector, the need for this combination of accommodation on one site is increasingly being recognised as important to people’s ongoing health and wellbeing.”

The topping out ceremony included representatives from UnitingSA, Walter Brooke architects and Kennett Builders, who are carrying out the construction.

The project is part of the broader transformation of Football Park, being undertaken by Commercial & General, which includes approximately 1300 new homes and a vibrant retail precinct including shopping, dining and community services.

“WSE do an outstanding job…the level of productivity is exceptional. It’s the energy that the team has, they are happy and it translates into great results”.