Home » News » The power of pets in aged care

The power of pets in aged care 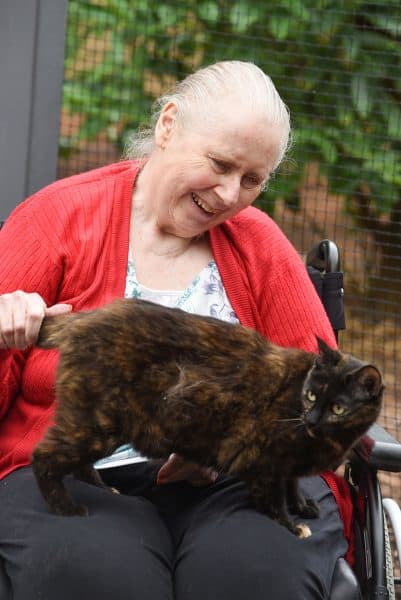 When Irene moved into Regency Green Multicultural Aged Care, one of the hardest transitions was having to leave her beloved cats behind.

She had lived with cats her entire life and the 73-year old struggled not having Bella and Durjie by her side.

She became depressed and didn’t want to eat or drink, causing great concern to the staff who worked with her each day.

From here, they were able to participate in the AWL’s Cats Fly In Fly Out program, in which cats and kittens visit Regency Green each week to socialise with residents.

“As part of the arrangement, the AWL agreed to make sure Irene’s cats were brought in here each week,” Mr Sharma says.

“Straight away you could see the change happening in Irene.

“She started smiling, she started talking and eating – we could clearly see the difference in her.”

Irene says “it was a great relief” when she saw her cats on those visits, but she still longed to have them permanently by her side.

Noticing her need, staff went out of their way to help make Irene’s wishes come true – just in time for Christmas.

UnitingCare Wesley Bowden staff, who had previously supported Irene with home care, helped raise money to convert the courtyard near her room to a cat enclosure, with UnitingSA also contributing funds.

Kennett Builders and Adelaide architects Walter Brooke & Associates donated their time and materials to build a platform linking Irene’s room with the outside enclosure.

Now, Bella and Durjie are enjoying exploring their new home, while their proud owner watches on.

“They seem to be settling in very well,” Irene says with a smile.

“I am very grateful they are here with me.”

Irene’s reunion with her cats isn’t the only way Regency Green Aged Care is catering to people’s pets.

There is also a resident who has her dog living with her, as well as an off-leash dog exercise area for family and friends to bring pets in to see residents.

“We want to make sure that bond is nurtured,” Ms Burton says.

“Just because somebody is at the stage they need to move into aged care, it doesn’t mean they should lose their companion.

“I have always had cats myself and I would like to think when I am older I will also be able to bring them with me wherever I move.”

Regency Green is now on the lookout for other cat lovers who may enjoy volunteering their time to help Irene look after her cats, including cleaning their enclosure and feeding them.